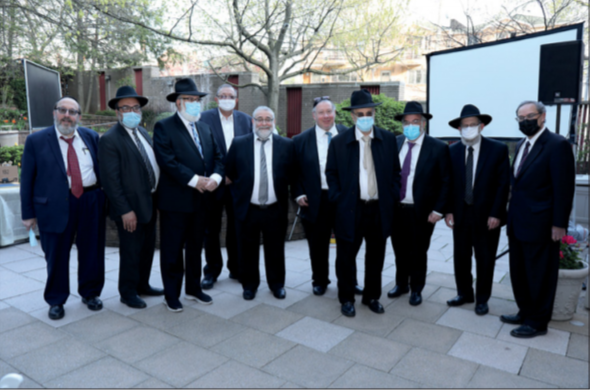 “We recently recognized Yom HaZikaron, memorializing soldiers who lost their lives and civilians who were lost from senseless acts of terrorism,” said Richards, “as well as recognizing Yom HaAtzmaut, Israel’s Independence Day, during a number of roundtable discussions with various leaders. It is so important to recognize Israel’s independence and their meaning and importance to our Jewish community right here in Queens County – the most diverse county in the world.”

Richards explained that one of the keys that he intends to establish during his administration is to chart a course to becoming one Queens. “I am proud to see that at tonight’s program many rabbis from the community are here in honor of a rabbi that did so much for us,” Richards added. “We must remember the message that was given to us to spread love – to make sure that we are looking out for each other even in dark times, and that’s who we are in Queens County.”

Rabbi Fabian Schonfeld was remembered as the driving force behind the building of one of the strongest Jewish communities, namely Kew Gardens Hills, and was a respected leader throughout Queens. “On behalf of the nearly 2.4 million residents of Queens – the World’s Borough – we mourn last year’s passing of Rabbi Fabian Schonfeld,” stated Richards who noted that we all drew inspiration on Rabbi Fabian’s many contributions in the Jewish community and beyond.

State Assembly Member and Comptroller candidate David Weprin said, “Rabbi Fabian Schonfeld was the pioneer in building the Orthodox Jewish community in Queens County.” Weprin joked, “I am actually old enough to remember it. My father was friendly with Rabbi Schonfeld, and his leadership has been taken over by Rabbi Yoel Schonfeld in continuing a tremendous legacy in Queens and beyond in the entire city and state.”

Council Member James Gennaro related personal recollections. “Rabbi Fabian Schonfeld was a real friend of mine.” Towards the end of Gennaro’s first Council run, he aspired to honor Rabbi Fabian who, out of modesty, declined recognition. Gennaro managed to award the Vaad Harabonim of Queens’ 50th anniversary instead at a well-attended City Hall event. “Together, we hondelled a deal to honor the 50th anniversary of the Vaad, as Rabbi Fabian was a co-founder,” said Gennaro, adding, “This was a compromise he could not refuse.” Gennaro also pinpointed a meeting at the Young Israel of Kew Gardens Hills where community members were angered at a decision that simply could not be altered. Various leaders spoke of a hope to enact a change, but Gennaro spoke the truth. “After I was booed, Rabbi Schonfeld got up to say, ‘Jim Gennaro had the courage to tell you the truth because this is just how it is going to be, and I agree with him.’” Gennaro then spoke on a deeper level: “He was just a wonderful man; he was able to mentor me in a way and was my friend. He gave me counseling when my wife was sick, and I am happy and very blessed to have with me my wife Wendy of seven months who is here with me today.”

Linda Spiegel also mentioned the extent of gratitude owed to Rabbi Fabian Schonfeld. “I consider myself having been a very good friend of his. He helped me a lot personally and he also helped this community enormously. So many people came to Margaret Tietz because he put his hand on this facility and adopted us.” When Margaret Tietz was considering going kosher, Spiegel noted Rabbi Fabian’s reaction: “It’s gonna work and all the rabbanim will come behind you and we will talk this up and make sure that this is the place for the Jewish community.” Today, Margaret Tietz continues to proudly hold onto these words. “We want to be the apple of the eye of this community,” concluded Spiegel.

Mr. Avi Polinsky of Your Art’s Desire has a storied history with Margaret Tietz doing the Judaic and decorative work for the facility. At the event, he presented Rabbi Oelbaum with a unique mezuzah. “The illustrious thriving communities of Poland were annihilated during World War II by the Nazis, but in 2014 there were two young entrepreneur artists who have Jewish roots in Poland and decided to do something to preserve the 1,000 years of Jewish life that was once in Poland.”

Polinsky explained that the pair discovered hollows in the doorposts where the mezuzahs once were and decided to make casts in bronze of these doorposts to eternally remember the 3.5 million Jewish lives that once lived in Poland. “The mezuzah we chose for Rabbi Oelbaum is from Sokołów Podlaski.” This area was from the Warsaw Principality during Napoleon’s rule in 1807. It is reported that in 1765 there were 163 Jews, and in 1931 the Jewish number rose to 5,027. The area also had many chasidic branches and shtieblach alongside noted sages.

The Rivers Cup was presented to Rabbi Yoel Schonfeld and Rabbi Chaim Schwartz. Its inside mimics the pages of a sefer Torah with 64 engraved Kabbalistic words. These words have a permutation and connotation reflecting the four rivers that leave Gan Eden, and drinking from this cup is said to have amazing healing powers and blessing. Words were also delivered by US Representative Grace Meng, as well as a presentation of citations of honor to the listed rabbanim. Recognition was also prepared for Rabbi Eytan Feiner, rav of The White Shul, who had a pressing matter at his congregation and could not attend.