We had a special meeting here at Margaret Tietz on the evening of Nov. 30. Many of the new Rabbi’s in the community were Welcomed to our facility and were able to meet with many of the Rabbis that represent prominent Shuls and organizations in the community for the first time.

More information about this meeting can be found in the Queens Jewish Link newspaper, and is featured below.

Over the last twelve months, various rabbinical figures assumed the pulpits of their respective congregations. The Margaret Tietz Nursing and Rehabilitation Center took note of this and hosted a summit, bringing many of these rabbis face-to-face for the first time. The brainchild of Linda Spiegel, Director of Public Affairs for the facility, the conference was co-hosted by the Vaad Harabonim of Queens (VHQ), the formative agency that helped the center become a sought-after destination for the frum Jews of Queens and beyond. The conference, which included the likes of Rabbi Yehuda Davis of Kehilas Torah Temima, Rabbi Elisha Friedman of the Young Israel of Forest Hills, Rabbi Judah Kerbel of the Queens Jewish Center, Rabbi Daniel Rosenfelt of the Young Israel of Kew Gardens Hills, Rabbi Etan Schnall of the Young Israel of Hillcrest, and Rabbi Mayer Waxman (Executive Director, Queens Jewish Community Council) were treated to a buffet provided by Hapisgah Steakhouse.

Spiegel explained, “Many of our residents cannot take care of themselves anymore, so we bring in self-help tactics, and various agencies for assistance.” Since its inception, originally as a non-profit, Margaret Tietz has been a guiding light for Shoah survivors, often having these heroes and heroines join as volunteers to work with other survivors in recovery. However, at the time, like the non-observant survivors they served, Margaret Tietz unfortunately did not run a kosher program. In turn, Spiegel noted that until today, Margaret Tietz, which is not officially a Jewish rehabilitation center, “gives priority” to residents who experienced the horrors of the Holocaust. Just about 16 years ago, under CenterLight Healthcare, they took on the VHQ kashrus supervision, enabling them to serve their religious neighbors from the many communities in their midst.

Today, the center is managed by Cassena Care, which has continued the efforts to make Jewish heritage a central focus. “As a proprietary facility, money has been poured in throughout the Center,” stated Spiegel. She went on to note that the shul where the meeting was conducted was recently constructed at the direction of Cassena Care “to continue the mission of caring for the Jewish community, particularly the frum contingent, in a bigger way.” Cassena also continues the signature warmth of Margaret Tietz, providing various staff members who all have an open ear for residents and their family members any hour, especially on the weekends or Motza’ei Shabbos. Margaret Tietz, as well, carries on the legacy of being a fixture within the Jewish community and supporting its collection of projects. 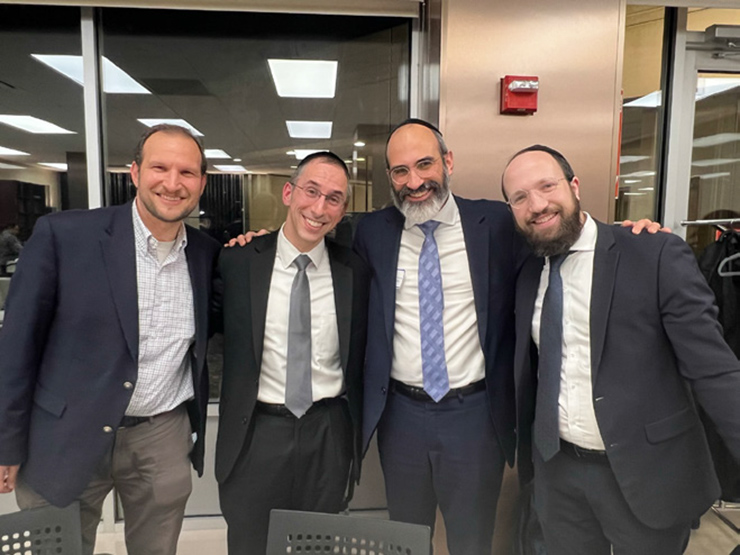 “Everything a rav needs to be able to give that suggestion where to bring a loved one is here at Margaret Tietz,” explained Rabbi Chaim Schwartz, Executive Vice President of the VHQ: “The care, the service, Rabbi Pearlman with the pastoral care, Linda Spiegel to ensure a smooth transition, and an administrator on hand, making sure the staff is properly situated to make the stay as comfortable as possible.” Rabbi Schwartz added, “Over the years, the facility administrator has taken on the great responsibility of maintaining the kosher program and making Margaret Tietz a friendly home, where the frum community could feel welcome,” as he offered thanks to the current administrator, Kwang Lee, for his dedication to the Jewish community over the last four years, this during his second stint in this position.

Rabbi Schwartz discussed his own father’s health challenges and their rehab options. “My mother suggested to bring him to New York where the VHQ provides various rehabs with a hashgachah. However, there was one place that I felt I would be able to interact with the staff and be on top of him, and that was Margaret Tietz.” In the end, he stayed close to home in Lakewood, but many strings were pulled to arrange a smooth transfer where it was required. “This is a place we are all very proud of,” concluded Rabbi Schwartz with a final word of strength.

“Tonight is about all of you,” said Mr. Lee: “those rabbis who are new to the community, as well as our veteran rabbinical leaders. We are not just here to treat and care for patients. Rather, we are a resource for the community.” Lee encouraged the rabbinical assemblage to think of Margaret Tietz as partners in their work.

“We started with a little kosher program in a separate designated kitchen, soon evolving into the entire facility becoming completely kosher,” recognized Rabbi Zavel Pearlman, a 16-year resident chaplain who came to Margaret Tietz via a non-profit where he was employed. Today, a heimishe flare permeates its walls. “Shabbos and Yom Tov are incredible at Margaret Tietz. In Queens, we are the only facility with a real beautiful minyan on Shabbasos, courtesy of bachurimfrom Yeshiva Chofetz Chaim, due to an ownership that has been very generous with Jewish programming. We have a full Rosh HaShanah davening and, on Yom Kippur, services begin with Kol Nidrei and continue through N’ilah.”

Following the Shabbos and Yom Tov morning davening, the facility provides a hot kiddush with delicious cholent and kugel. “The nicest part is that the boys from Chofetz Chaim participate and assist the residents and their families with serving the food, making a lasting impression, especially on the female residents. Rabbi Pearlman also spoke of Meir Levine, a mispallel at Rabbi Dov Lerner’s Young Israel of Jamaica Estates, who comes weekly since the p’tirah of his father and takes over the show, making a Mi SheBeirach and announcements, when necessary, for each resident. “On Sukkos, we had a big, beautiful sukkah that hosted our special kiddush.” The attention to detail is remarkable, considering that the bimah was designed to adapt for a wheelchair, and the shul includes a handmade paroches and Torah mantel. Rabbi Pearlman also spoke of the inclusion of six-branch menorahs incorporated throughout the shul, and how he puts on t’filin for residents when given the chance. Over the years, both of Rabbi Pearlman’s parents were facility residents more than once.

Rabbi Shmuel Marcus, President of the VHQ, and rav of the Young Israel of Queens Valley, spoke of the responsiveness and assistance offered by Mrs. Spiegel, who is always true to her word. “Over the years, I have had many opportunities to visit residents and members of my shul, and it has always been a very comforting experience. As rabbanim, you can have the confidence that your balebatim will be getting the care that they need over here when necessary.”

In his remarks, Rabbi Shlomo Nisanov, rav of Kehilat Sephardim of Ahavat Achim, discussed his 32-year presence in Kew Gardens Hills, and the growth of his kosher client choice food pantry, the largest of its kind on the East Coast. He also conveyed how happy his family was, following his mother’s stay over the Yamim Tovim at the facility following a knee replacement amid COVID restrictions. “They went beyond making her feel comfortable, allowing visits, and providing for family who stayed overnight. Even when I came at 10 o’clock at night on a Motza’ei Shabbos, accommodations were made.” Rabbi Nisanov branded a new motto for the first-time visitors: “This place looks like a miniature hotel, where there is real TLC creating the feeling of a real family,” he said as he detailed the beautiful private rooms, proximity to our communities, the ability for his mom to fulfill the mitzvah of t’kias shofar, a Shabbos elevator, a nearby Shabbos apartment, and a variety of languages spoken.

Rabbi Nahum Kaziev, rav of Ohr Natan of Rego Park, spoke of his mother’s extremely positive experience at Margaret Tietz, highlighted by the top-notch medical care. Rabbi Hayim Schwartz, Executive Director of Yeshiva Chofetz Chaim, spoke of the time his mother-in-law a”h was a facility resident before it was completely kosher. He recalled the warmth showered upon her. “She once called me and asked, ‘Where did you put me, a hotel, or a nursing home? This morning, they asked me how I like my eggs!’” Rabbi Schwartz also acknowledged the Yeshiva’s partnership to provide as much religious services as the facility wants. Rabbi Schwartz spoke of a time prior to COVID when there was a daily minyan. “Rabbi Fabian Schonfeld zt”l stayed here and related, ‘I felt like a mentch being able to go down to daven.’” 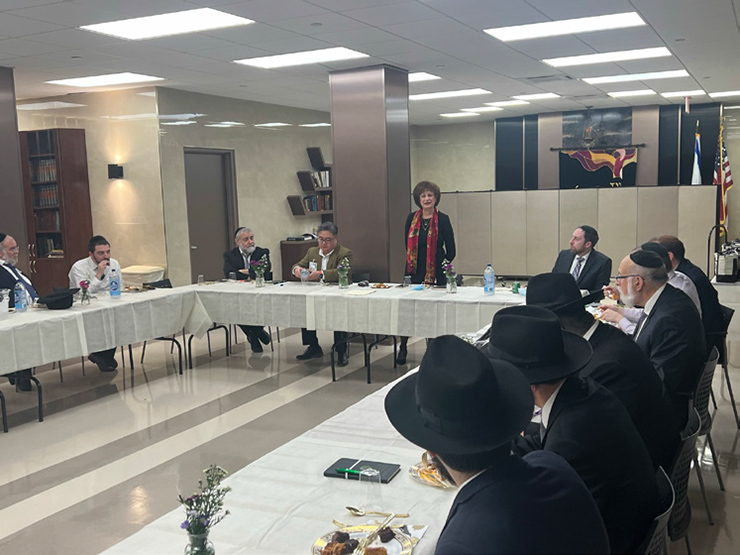 Rabbi Daniel Pollack, Jewish liaison to Congress Member Grace Meng for over a decade, explained the importance of Meng’s efforts and highlighted her unique Chanukah party that acts as a uniter for rabbanim, community leaders, and elected officials.

For over 40 years, Rabbi Elchonon Zohn has been Director of Queens Vaad Chevrah Kadisha and founder and President of the National Association of Chevra Kadisha, NASCK. He spoke of the “tremendous cooperation” he experiences with the facility nowadays.

Rabbi Yossi Mendelson, rav of Congregation Machane Chodosh of Forest Hills, iterated to the attendees that his unique position as chaplain at NewYork-Presbyterian Queens gives clergy immediate access to alleviate concerns when necessary.

As the only outside individual present, I can attest to the earnestness of each speaker as the rabbanim divulged personal details to share with the greater Queens Jewish community. Through the selfless energy of Linda Spiegel, Margaret Tietz has once again emerged as an institution of unity, proving its worth to the Jewish community. The center intends on hosting similar networking gatherings in the forthcoming months.