On Thursday, April 28, the students at HAFTR Lower School commemorated Yom HaShoah. Fifth graders performed an adaptation of Karen Hesse’s book, The Cats in Krasinski Square. The story illustrates the bravery of a young girl and her sister who escape the Warsaw Ghetto. Despite the danger, they smuggle food inside the ghetto using the cats as a decoy. Students then sang “Ekra,” by Shalsheles and “From A Distance,” by Julie Gold with a Hebrew version by Hadar Orshalimy. special dedication was to made to the Holocaust survivors living in the Ukraine, once again in great danger.
Holocaust survivor and great-grandparent Mrs. Judy Drummer spoke to the students about her experience. Despite he constant danger, her family continued to live as Jews, observing mitzvot. She offered words of inspiration and gratitude to Hashem for giving her this opportunity. Mrs. Drummer and her great-granddaughter. 5th grader Sophia Katz, lit six Yahrzeit candles in memory of the six million Jews killed in the Shoah. The program concluded with the entire audience singing “Acheinu” and “Ani Maamin.”
Fifth graders also participated in the world-wide phenomenon The Butterfly Project. Ms. Hammer introduced the project and read the poem, “The Butterfly,” written by Pavel Friedman, a child prisoner at Terezin who was later killed at Auschwitz at the age of 21. Each student learned about the life of a Jewish child killed during the Holocaust. They then painted a ceramic butterfly to add to our installation in memory of the 1.5 million Jewish children killed during the Shoah.

Margaret Tietz Nursing and Rehabilitation Center hosted an annual memorial service for Yom HaShoah this past Thursday, April 28. The Remembrance Day for Jewish martyrdom and heroism included the participation of residents, rabbis, elected officials, and survivors of Nazi brutality.

I met resident Elizabeth (Klein) Linzer, 95. originally from Budapest. She was lucky to be one of those freed by Swedish architect Raoul Wallenberg. Once in America, she built a remarkable life in Forest Hills and was privileged to have her son join for the remembrance event.

The program began with a convening by Rabbi Dr. Richard Weiss, mara d’asra of the Young Israel of Hillerest, and continued with a “Kel Maleh Rachamim,” prayer for the souls of the departed, led by Rabbi Mayer Waxman, Executive Director of the Queens Jewish Community Council. Rabbi Weiss led the service commencement, delivered inspirational words, and orated the kaddish memorial prayer.

Quoting from Witness: Voices From The Holocaust, Rabbi Weiss described Christa M.’s account of a rabbi being tortured, “She saw Nazis humiliating a rabbi the streets of the of city, forcing him beat a drum and chant, ‘I am a filthy Jew!’ In school she was taught to see Jews as left unhuman, dangerous to children and the cause of all woes.”

She testified, “The was bedlam, filled with SS, loudspeakers all over the place. Hitler screaming, I mean like he screamed.: couldn’t stand his voice. He always screamed and screamed, We’re winning the war!’ You don’t have to be very bright. You look around and then you hear this. We’re winning the war,’ and then you’re in shambles.” She once gave out pieces of cheese to the Jews and felt the wrath of the SS, “If you give those ‘ one more piece of whatever you got there, got I’m going to make you join them.’ Concluding the Christian German student’s story, Rabbi Weiss sadly reported, “After the war, she felt she could no Ionger remain in Germany and immigrated to Paris, then to the United States. In 1985, she returned. It was all the same stuff. Nothing had changed.”

Guest speaker Benjamin Pinczewski, esq. of Pinezewski & Shpelfogel and PC & of Counsel to Elefterakis, Elefterakis, & Panek, passionately shared the story of his parents who lived under heavy antisemitism in Poland. The couple was the first of many weddings to be held post-liberation. Pinczewski’s mother came from Sosnowlee, Poland, and was fourteen at the onset of the war. Her father, kosher butcher, was an easy target for the Germans and was immediately eliminated. His father experienced terrible antisemitism in the Polish army and was taken prisoner by the Russians and exiled to Siberia. After escaping to Poland, he winded up in the Blechhammer camp, the second-largest Auschwitz subcamp, where he met Pinezewski’s mother, twelve years his junior. She stuck out as catch when he refused food that she had given him, “Be here a bit and you will be begging for this.” She had been transferred and he eventually got note to her via the underground. She replied that they needed shoes, and he arranged for this delivery. A note replying that the shoes arrived was intercepted by the Nazis. Under questioning, she told the guards that the man had a crush on her and wanted to look good in her eyes. They both survived the ordeal.

Later, his mother ended up the Bergen-Belsen concentration camp, while his dad landed at the Buchenwald concen-tration camp, ending all contact. Once freed, his father encountered someone from his mother’s hometown who knew that she had been under surgical care Bergen-Belsen. The two soon reconnected and married and had a son in 1949 who in became and dentist and Benjamin in 1960. “My parents were determined to my life be the • pposite of theirs with freedom. It is their perseverance and determination that built me. I saw this same spirit in most of their survivor friends,” explained Benjamin.

“The biggest problem is silence. Not a day goes by that I do not think about what occurred and do what I can to make sure it never happens again.”

The program continued with a touching lighting of memorial candles mourning the six million Jews who expired at the hands of the Nazis. Pinczewski lit the first candle in memory of helpless infants, children, and teenagers who were cut down like young trees before their time…before they had a chance to experience life.

Rabbi Waxman concluded the service with a rendition of “Ani Maamin” and “Hatikvah.”
While the event decried the tortured flesh of our Jewish brothers and sisters, the attendees noted how our spirit and faith are resolute. 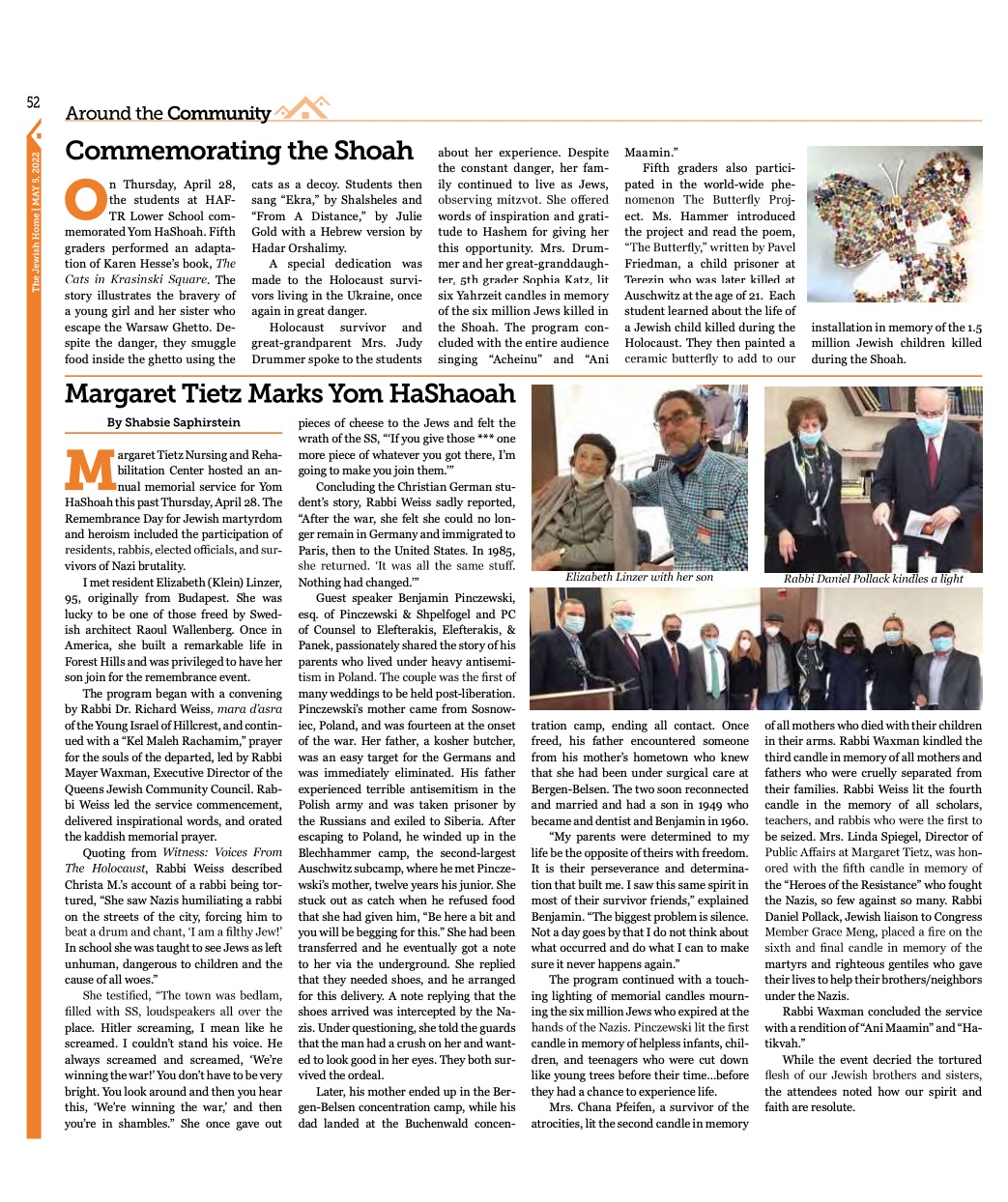