Margaret Tietz Raises A Toast To The Victors

With glasses of glistening white wine held high, Linda Spiegel, Director of Public Affairs at Maragret Tietz, thanked the cohesive team at the Center, along with their committed Administrator Kwang Lee. “I am honored that all our electeds are here and we wish them all the best of luck.”

“Queens has led the way,” noted Meng in the event’s opening remarks. “This was made possible through its diversity and demonstrated with the Primary Election.” Meng acknowledged the strides of the elected officials in attendance and their resilience, acting on behalf of their constituents over the past year-and-a-half through the pandemic. “I am proud of all you accomplished,” Meng pronounced as she announced the successes of each of the morning’s honorees and gave a special shout-out to Councilman Gennaro, Borough President Richards, and Council Member Justin Brannan of Brooklyn’s 43rd District. In speaking of Ung, an acquaintance of hers for twenty years and a previous work colleague, Meng voiced, “Our district is in great hands!” adding, “Sandra is a person of integrity and always keeps her word.”

Meng was particularly appreciative for the communal and humanitarian efforts of Lee on behalf of the Korean community. “My family was probably vaccinated because of her outreach at KCS Northeast Queens.” The permanent vaccination site at the Korean Community Services of Metropolitan New York, Inc., the brainchild of Lee, has demonstrated itself as a vital resource for the aging community that once lacked a community center.

Meng attributed her first meeting with Schulman to her own first run at Congress, where they were introduced by Council Member Karen Koslowitz, who has remained a close confidant to Schulman. “It is a great feeling that part of my district will have such a great leader,” concluded Meng.

In his direct comments congratulating the new class, Queens Borough President Donovan Richards said, “These three women truly embody public service.” Richards pointed to their history of concern for the community and acknowledged that we know what we are getting with these leaders. Richards, who recently delivered the keynote talk at Margaret Tietz’s popular Evening of Inspiration, expressed of the women, “They are true supporters of Israel and will bring great leadership in the Council.” Richards also highlighted diversity. “There is no better place in the world to set an example for the rest of world.” He then urged the Council to bring more money into the Borough President’s office: “Let’s share in doing more for our borough,” adding, “I look forward to partnering in the work of the Community Boards and the budget.”

Gennaro gave the floor to the women before his address. Linda Lee credited the morning’s special guest for her triumph: “Thank you, Grace, for believing in me.” If elected, Lee will be only the second Korean-American to ever be on the Council. Lee acknowledged her peers at KCS for stepping up – Myoungmi Kim, the Executive Vice-President/Director of Adult Day Care, and Helen Ahn, Director of Senior Services – and mentioned the importance of the electeds present. “It takes a village to deliver results and you all played an important piece. Barry, I know I have important shoes to replace,” said Lee, referencing Council Member Barry Grodenchik. “I look forward to carrying on all that you have done.”

“My door is always open,” stated Sandra Ung. “I look forward to working with all my colleagues.” Ung took note of her dear mentor Rep. Grace Meng, and the Congresswoman’s Jewish liaison Rabbi Daniel Pollack, both of whom were guiding forces in her campaign.

“I am grateful for a place like this,” touted Lynn Schulman about Margaret Tietz and its isolation from COVID. “This is one of true bright ones.”

“I have big shoes to fill,” recognized Lynn Schulman, steps from her soon-to-be predecessor, Council Member Karen Koslowitz. “I wouldn’t be anywhere near here if it werent for Karen, who supported me years before the election.” Schulman candidly identified with her platform. “I ran as a progressive and when Rabbi Pollack asked me what that means, I said it means I am not a Socialist.”

“Where would we all be without Grace Meng?” wondered Council Member James Gennaro. “The world would be different. Thank you for keeping Earth in its orbit. We love you very much.” Gennaro took time to toast all the officials present, explaining their great worth and how it is a pleasure for him to be counted amongst them. Echoing the tests of the last eighteen months, Gennaro recalled his first Election Day, one that included many of those in attendance. “On September 11, 2001, I stood at PS 173, our first Election Day, and we held each other crying as we were figuring out how to hold the world together. I want to honor the great leaders who get to come to the City Council.”

NY State Senator Leroy Comrie, who once headed the Queens delegation, took note of a point of pride for the nursing and rehabilitation center during the pandemic. “Margaret Teitz was not listed as a nursing home that had a problem.” Comrie pledged his assistance to all.

Margaret Tietz is located at 164-11 Chapin Parkway in Jamaica Hills. For further info, please reach Linda Spiegel at 718-298-7838 or lspiegel@margarettietz.org. 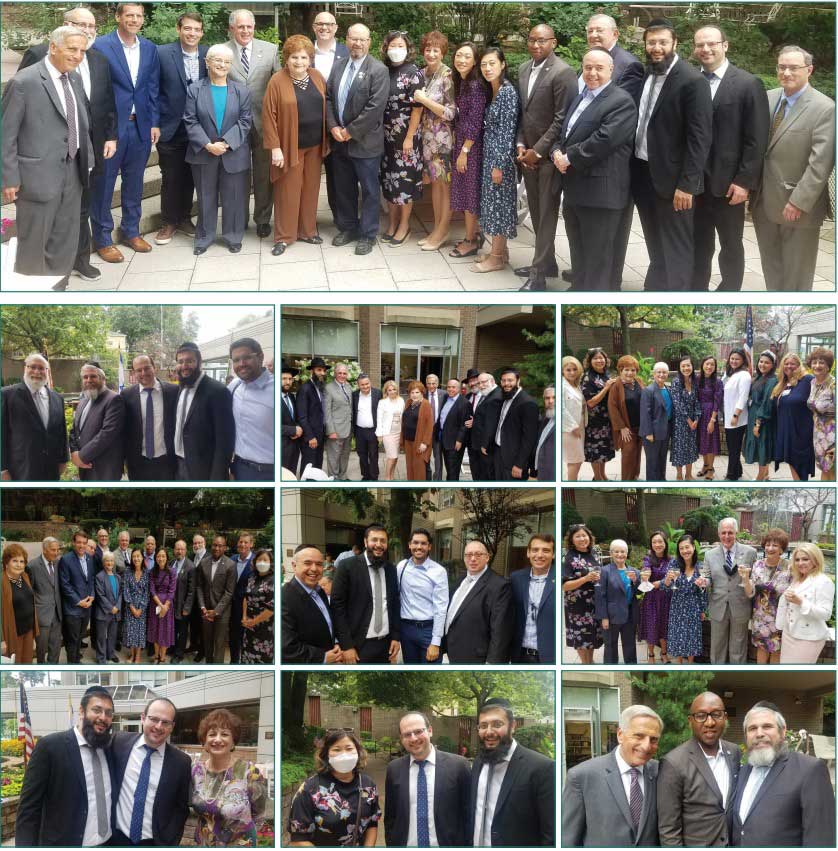