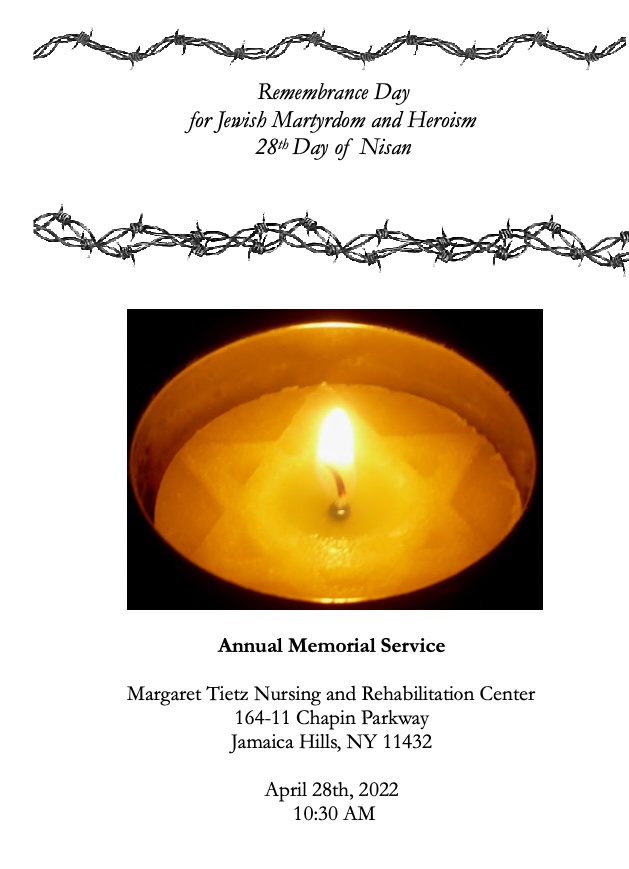 WE REMEMBER THE HOLOCAUST

We mourn for six million of our people, brutally destroyed by “civilized men” behaving like savages. The cruelties of Pharaoh, Haman, Nebuchadnezzar, and Titus cannot be compared with the diabolical schemes of the modern tyrants in their design to exterminate an entire people.
The blood of the innocent who perished in the gas chambers of Auschwitz, Bergen-Belsen, Buchenwald, Dachau, Treblinka, and Theresienstadt, cries out to God and man. We will never forget the burning of synagogues and houses of study, the destruction of holy books and scrolls of Torah, the sadistic torment and murder of scholars, sages, and teachers.
They tortured the flesh of our brothers and sisters; but they could not crush their spirit, their faith, their love.
We recall our brothers and sisters in the Warsaw Ghetto, Jews who valiantly defied the monstrous adversaries.
And we recall the heroism of those who, in the face of unprecedented and overwhelming force, maintained Jewish culture and asserted Jewish values in the very midst of enslavement and destruction.
Let us pray:
O Lord, remember Your martyred children.
Remember all who have given their lives for the sanctification of Your name.
Even as we mourn, we recall those compassionate men and woman of other faiths and nationalities who, at the peril of their lives, saved some of our people. Truly, “The righteous of all nations have share in the world to come.’
Let us pray and work for the day when there shall be no violence or desolation on earth, when “nation shall not lift up sword against nation, nor shall they learn war any more.”

Never Again…
Remembrance
Is
Our Protection,
Our Duty,
Our Commitment.

First Candle – Mr. Benjamin Pinczewski, Esq 2nd Generation
In memory of helpless infants, children and teenagers who were cut down like young trees before their time…before they a had a chance to experience life. We shall never forget!

Second Candle – Mrs. Chana Pfeifen Survivor In memory of all mothers who died with their children in their arms. We shall never forget!
Third Candle – Rabbi Mayer Waxman Executive Director, Queens Jewish Community Council
In memory of all mothers and fathers who were cruelly separated from their families, We shall never forget!

Fourth Candle – Rabbi Richard Weiss
In memory of all scholars, teachers, Rabbis who were the first to be seized. We shall never forget!

Fifth Candle – Mrs. Linda Spiegel
In memory of the “Heroes of the Resistance” who fought the Nazis SO few against so many. We shall never forget!

Sixth Candle – Rabbi Daniel Pollack In memory of the martyrs and righteous gentiles who gave their lives to help their brothers/neighbors under the Nazis. We shall never forget!

I believe with all my heart in the coming of the Messiah, And even though he may tarry, I will wait each and every day for his arrival.
-Maimonides, 12th Century